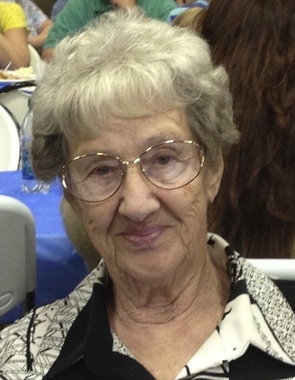 Back to Lillie's story

Lillie Elizabeth Pryor Hutton was born April 15, 1935, to Edgar and Mila Pryor in Edmond, Okla., and passed away Dec. 9, 2019. She lived in Edmond her entire life and graduated from Edmond High School in 1953.
Growing up in small town Edmond, one of the few entertainments for young people was the roller skating rink. It was there that she met the man who would soon become her husband. She married Jan Hutton in 1956. They were married for 52 years and had three children.
Liz worked for many years as a waitress and was a manager at Edmond Lanes for several years. She was one of the last waitresses at the Wide-A-Wake Cafe when they closed in 1980.
Liz was preceded in death by her husband, Jan; her parents; and two older brothers, Allen and Bobby.
She is survived by a brother, Richard Pryor of Edmond, and a sister, Betty Wilkinson of Kingfisher. She is also survived by her son, Max Hutton, and wife, Cynthia; her son, Richard Hutton, and wife, Sheila; and her daughter, Janita Hawk, and her husband, John. She also is survived by 11 grandchildren, 12 great-grandchildren, and one great-great-grandchild.
Liz will be greatly missed by her family and many friends, who enjoyed her fun-loving personality and sense of humor. As per her request, we will conclude in her own words: "She's gone. Hallelujah!"
Published on December 13, 2019
To plant a tree in memory of Lillie Elizabeth Hutton, please visit Tribute Store.

Plant a tree in memory
of Lillie

A place to share condolences and memories.
The guestbook expires on March 12, 2020.