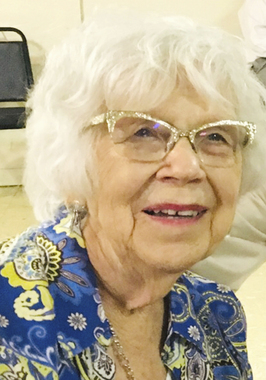 Back to Jackie's story

Jackie Sue (Grantham) McBroom was born in McAlester, Okla., to Jack and Mamie (Brassfield) Grantham. She was raised in McAlester and graduated from McAlester High School in 1948. In high school, Jackie was a member of the debate team, the dramatic Golden "M" Club, the Thespians National Dramatic Club, and the Pep Club. She also worked in the library for three years and was editor of the high school newspaper her senior year.
After graduation, she attended East Central State College in Ada, Okla., and in three years attained a bachelor of science degree in Elementary Education with a minor in Speech. While in college she also was active in the Girl's Pep Club, the Circulate Square Dance Club, Pi Kappa Sigma, and president of Alpha Psi Omega fraternity. She carried the lead in several one-act plays and was director of a cutting from The Glass Menagerie. She had leading roles in "I Remember Mama" and "Dear Ruth." For her acting in "Dear Ruth" she received the Best Actress award for the year. Most significantly, she met and dated Perry Don McBroom.
In 1951, Jackie graduated college and started her teaching career in McAlester at Emerson School. Perry had joined the U.S. Navy and gone off to basic training in California. In October, Perry finished basic, flew in to Oklahoma and they married on Oct. 7 with a brief honeymoon at Lake Murray before he shipped out to the Philippines for 18 months. When he returned from overseas Jackie quit her teaching position and they moved to San Diego, Calif., for the next two years. Jackie taught for a while, they had their first daughter, Donna Sue, and then when Perry was discharged, they moved back to Ada, Okla., where their son, Jack, was born. After Perry finished his degree they moved to Tulsa, Okla., for a year where they both taught before moving to Norman, Okla. Jackie taught in Moore, Okla., and took the long two-lane road to Central State College in Edmond, Okla., taking some graduate classes, while Perry did construction work and took graduate classes at OU, and they welcomed their third child, Janie. In 1960, they moved to McAlester where Perry taught and Jackie stayed home with the younger two children for three years, before resuming her teaching career. And she again traveled a long two-lane road to Durant, Okla., for night classes and received her masters degree from Southeastern State College.
In 1968, the family moved to La Habra, Calif., where they both taught until 1989, when Perry passed away. At that time, after almost 30 years of teaching, Jackie retired and moved to Edmond.
Through the years Jackie was always greatly involved with her family and their activities, and in her church of Christ congregations where she taught Bible class for kids, taught Ladies' classes, hosted and chaperoned youth group gatherings and retreats, and organized adult events. In California, she was involved with the Associated Women for Pepperdine, and in Edmond she was involved with the Oklahoma Christian Women's Association.
After retirement, she spent lots of time caring for grandchildren and attending their activities. She also went on three mission trips: Germany for three weeks, and two separate six-week long trips to Warsaw.
Jackie was preceded in death by her husband of 37 years, Perry; her parents, Jack and Mamie Grantham, and sister-in-law, Jolene Grantham.
She is survived by her children, Donna Sue (Mike) Arnold, Jack (Melody) McBroom, and Janie (Don) Leftwich; her grandchildren, Jackie Beth (Wyatt) Cadenhead, Tracy (Shawn) Watkins, Robbie (Hannah) Leftwich, Amanda (Zach) Lytton, Kimberly (Ryan) Harper, Bryan (Maggie) Leftwich; brothers, Cap (Martha) Grantham and Virgil Grantham; sister, Molly Jo (Sam) Snyder; 10 great-grandchildren, Tucker Cadenhead, Ryder Cadenhead, Logan Watkins, Connor Watkins, Hazel Leftwich, Ella Harper, Perry Lytton, Rosemary Leftwich, Reese Harper, and Bennett Sue Lytton; and numerous cousins and nieces and nephews.
A memorial service will be 10 a.m. Monday, Dec. 9, 2019, at the Matthews Funeral Home in Edmond, Okla., followed by burial on Monday afternoon at 3 p.m. at Lone Grove Cemetery in Scipio, Okla., outside of McAlester.
Memorial donations may be made to Oklahoma Christian University and designated to the Perry McBroom Memorial Scholarship fund. Please send to Oklahoma Christian University, 2501 East Memorial Road, Oklahoma City, OK 73013.
Published on December 6, 2019
To plant a tree in memory of Jackie Sue McBroom, please visit Tribute Store.

Plant a tree in memory
of Jackie

A place to share condolences and memories.
The guestbook expires on March 05, 2020.