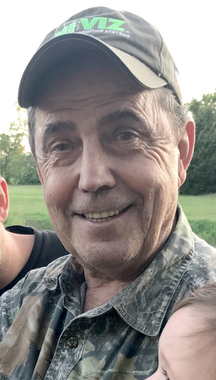 Back to Harold's story

Harold Drew "Bud" Owen, Jr., of Edmond, Okla., passed from this earth to be with his Lord and Savior on Dec. 24, 2019, at the age of 67. Born on Jan. 25, 1952, to the late Harold "Drew" Owen, Sr. and Betty Jo Owen, Bud inherited a love of the outdoors and conservation from his dad and became an avid sportsman and lifelong advocate for conservation.
Bud graduated from John Marshall High School before serving in the 45th Infantry Division of the U.S. Army. After returning from the Army, Bud attended Central State University and went to work in the insurance industry for most of his adult life. Bud married his wife, Hope, in January of 1981. Bud and Hope shared over 39 years of love and dedicated their lives to one another and their two children, Lindsey and Hunter. Bud was proud of his family and loved talking and bragging about his children and grandkids. As his kids were growing up, he could be found on a field coaching one of their teams or cheering them on from the sidelines. Many of the kids he coached looked up to him as a mentor and they stayed close with him over the years. In addition, Bud was an accomplished hunter who was passionate about his bird dogs. Some of his happiest times were spent afield with his faithful companions Ranger, Ernie, and Bear. Bud was also a loyal friend and loved helping others who were down on their luck.
Bud is survived by his wife, Hope Owen; his children, Lindsey Fixley (Tyler), and Hunter Owen; his brother, Mike Owen; his sister, Teresa McDaniels; his grandchildren, Maxwell and Olivia; and numerous nieces and nephews.
He is preceded in death by his parents.
Bud lived life to the fullest and always focused on the positive. That is not to say he always expected life to turn out perfectly. As we say goodbye, he would want us to focus on the good memories. These parting words will forever remain in the hearts and minds of all those who loved Bud, "Love you. See you. Bye."
Visitation was 2-8 p.m, Sunday, Dec. 29, 2019, at Baggerley Funeral Home.
Funeral services will be 12 p.m. Monday, Dec. 30, 2019, at Baggerley Funeral Home in Edmond, Okla., with interment at the Wetumka Cemetery in Wetumka, Okla.
Published on December 30, 2019
To plant a tree in memory of Harold Drew Owen, please visit Tribute Store.

Plant a tree in memory
of Harold

A place to share condolences and memories.
The guestbook expires on March 29, 2020.