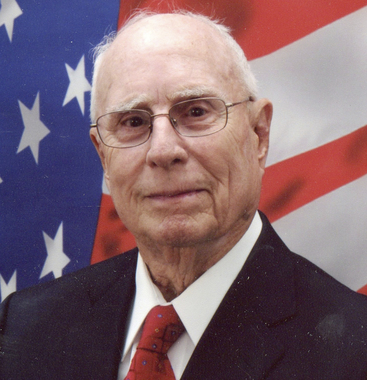 Back to Glenn's story

Glenn James Dooley was born Dec. 13, 1921, in Calvin, Okla., to Richard and Lula Dooley. He was one week short of his 98th birthday when he passed away on Dec. 7, 2019. Visitation will be 10 a.m. Friday, Dec. 13, 2019, followed by the service at 11 a.m. at the Crawford Family Funeral Home in Edmond, Okla. The graveside service will be 3 p.m. at the Resthaven Memorial Park in Shawnee, Okla.
Glenn graduated from Calvin High School and attended Murray State College before being drafted into the Army. He proudly served as a medical unit clerk with the U.S. Army's 13th Field Hospital in Europe. He was a D-Day Plus One survivor. One of his greatest joys was a trip back to Normandy, France with one of his grandsons and his grandson's family. After D-Day, Glenn fought across France until he and his fellow soldiers participated in The Battle of the Bulge.
After the war, Glenn returned to Oklahoma where he began work at the Holdenville Daily News as a printer. While in Holdenville, he met LaVelle Gardner, the love of his life. They married and later moved to Shawnee, Okla., then to Oklahoma City, Okla., and finally to Edmond, Okla., in 1964.
It is believed that Glenn worked for Oklahoma Baptists longer than any other individual. He began as a printer for the Bison Press in Shawnee in 1947. He then moved to Oklahoma City where he worked for The Baptist Messenger beginning in 1954 and retired in 1997. Glenn was loved and respected by all his fellow workers.
Glenn's greatest loves in life were his family and his Lord. Glenn was baptized at the First Baptist Church, Holdenville, Okla., in 1947. He was a faithful member of the First Baptist Church in Edmond for 55 years, where he served in many capacities, including deacon.
Glenn's greatest hobbies were gardening and golfing. Until recent years, he maintained large gardens of vegetables at his house in Southeast Edmond. He also continued golfing until two years ago.
Glenn is preceded in death by his parents; his wife, LaVelle Gardner Dooley; his wife, Rose Pointon Dooley; his brother, Clinton Dooley; and his sister, Marie Locke.
He is survived by his wife, JoAnn Johnson Dooley; his daughters, Brenda Prince (Michael) of Oak Ridge, Tenn.; Beverly Sleder (Jeff) of Lake Ann, Mich.; and his son, Brad Dooley (Brooke) of Bixby, Okla. He is also survived by eight grandchildren and eight great-grandchildren.
In lieu of flowers, please consider making a donation to Folds of Honor, whose mission is to provide educational scholarships to spouses and children of America's fallen and disabled service members: Folds of Honor Foundation, Department 13, Tulsa, OK 74182.
Published on December 9, 2019
To plant a tree in memory of Glenn James Dooley, please visit Tribute Store.

Plant a tree in memory
of Glenn

A place to share condolences and memories.
The guestbook expires on March 08, 2020.