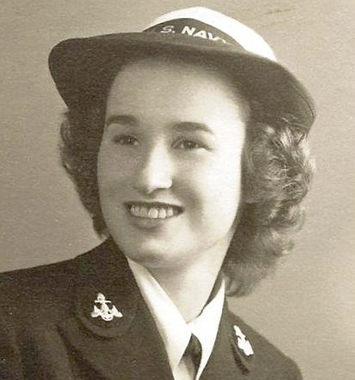 Back to Edith's story

Edith May Fletcher Gant, 96, passed away peacefully surrounded by family on Friday, Dec. 20, 2019, in Reno, Nev. Edith was born in Hammond, Ind., along with her twin brother, James, on July 19, 1923. Her parents, Richard and Nellie Fletcher, moved the family to Elmhurst, Ill., (outside of Chicago) where Edith attended the public high school and graduated in June of 1941.
After the bombing of Pearl Harbor, Edith felt the need to help and became involved with the USO. Driven to do more, in 1944 she joined the WAVES (Women Accepted for Volunteer Emergency Services) as soon as she turned 21 and attended basic training at Hunter College in New York with the Navy. Edith was proud to be in the Navy and a charter member of the Women's Military Memorial in Washington D.C. Her final assignment was in Washington, D.C., where she met her husband, James "Jim" Gant, who was a patient in the hospital at Quantico, Va. Jim was working as a civilian welder for the Navy at Pearl Harbor on Dec. 7, 1941, and soon after joined the Marines. They both left the military after the war ended and were married on Nov. 28, 1946.
They moved to Dallas, Texas, to begin their married life where Edith worked as a bookkeeper until her first child, Karen (Gant) Vollbrecht, was born in 1948. Her second daughter Mary Ann (Gant) Woodward was born in 195l. Edith and Jim traveled extensively to Thailand, Hong Kong, the Philippines, Scotland and Japan. In 1995 they moved to Edmond, Okla.
Edith was a loving mother, caring wife, selfless and giving woman who devoted her life to serving her country and her family. She was creative and enjoyed making clothing, dolls and crafts.
Edith is survived by her daughter, Mary Ann and husband, Bill Woodward, their three children, Jenni Runyan, Lindsay Dunn and Taylor Woodward; as well as Karen and Tom Vollbrecht's sons, James Vollbrecht and John and his wife, Melissa Vollbrecht; as well as her eight great-grandchildren.
Services will be 11 a.m. Saturday, Jan. 11, 2020 at Memorial Park Historic Cemetery Chapel in Oklahoma City, Okla.
In lieu of flowers, donations can be sent to Disabled American Veterans Department of Oklahoma, 14083 S. State Hwy 51 #112, Coweta, OK 74429.
Services are under the direction of Baggerley Funeral Home, Edmond.
Published on January 2, 2020
To plant a tree in memory of Edith May Gant, please visit Tribute Store.

Plant a tree in memory
of Edith

A place to share condolences and memories.
The guestbook expires on April 01, 2020.