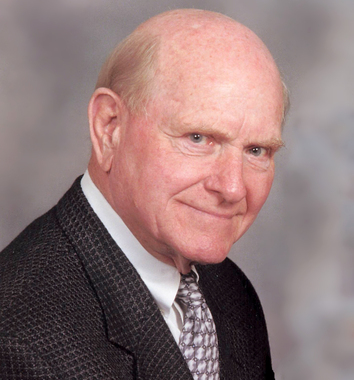 Back to Dr. Edward's story

Dr. Edward "Ed" Lee Fortenberry was born in Ada, Okla., on Aug. 31, 1926. He joined his Lord on Dec. 10, 2019, at the age of 93. He was part of the "Greatest Generation." Jan. 1942, he joined the Navy by telling the recruiter he was 17, he was only 15. He served on the island of Midway as a radioman. After WWII, Ed attended East Central State College where he earned his bachelor's degree in Business. He met his lifelong partner and bride, Charlene Kuykendall, where she worked as a ticket taker at a movie theater. They were married in Ada, Okla., in 1946 and remained happily married for 73 years until his passing.
Ed and Charlene lived in Edmond, Okla., for just over 46 years. Ed was hired to teach typing at Central State College in 1962. Education and development was his passion as he continued to develop himself and eventually earn his PhD in Management from the University of Oklahoma. Ed continued to touch many in Edmond as he continued to teach at the University of Central Oklahoma, until he retired in 1997 after 35 years.
Ed and Charlene were avid, some would say rabid, Sooner fans. They had season tickets, not only for football, but also for both men's and women's basketball for over 50 years. Ed and Charlene traveled the country in their retirement years, enjoying each and every new place they experienced. If Ed met a stranger, he left them as a friend. He was known for his compassion for others and his sharp sense of humor, which he maintained up until the day he died.
Ed and Charlene are longtime members of the First United Methodist Church of Edmond, where Ed served as head usher for many years.
Ed was preceded in death by their daughter, Debbie Fortenberry, and grandson, Christopher Wright.
He is survived by his wife of 73 years; two children, Denise Fortenberry Wright and her husband, Steven Wright of Meeker, Okla. He is also survived by their son, Kevin Fortenberry and his wife, Tammy Zerger Fortenberry, of Wylie, Texas. The surviving grandchildren are: Jason Wright of Edmond, Okla.; Jeremy Wright of Meeker, Okla.; Captain Tyler Fortenberry of Colorado Springs, Colo.; Keegan Fortenberry of Edmond, Okla.; Samantha Dooley of Ponca City, Okla.; and Desiree Dooley of Odessa, Texas. He was also blessed with nine great-grandchildren. Services will be Friday, Dec. 13, 2019, at Matthews Funeral Home.
Published on December 11, 2019
To plant a tree in memory of Dr. Edward Lee Fortenberry, please visit Tribute Store.

Plant a tree in memory
of Dr. Edward

A place to share condolences and memories.
The guestbook expires on March 10, 2020.

Gary Wright
One of the good guys. Will keep my parents in excellent company. Tell them a good joke or two always liked to laugh.
View all