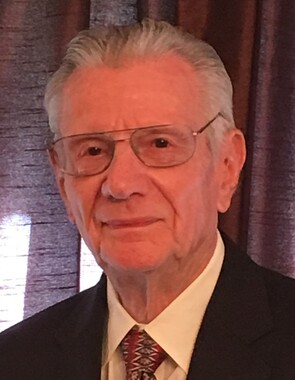 Back to Donald's story

Donald D. Holmes, DVM, MS, DACLAM, 89, passed away Jan. 13, 2020. A memorial service will be 2 p.m. Friday, Jan. 24, 2020, at First United Methodist Church, Stillwater, Okla.
Don was born to Raymond and Cornelia Holmes on Sept. 12, 1930, in Mannford, Okla. He attended Mannford High School and earned his DVM degree from OSU in 1954. Following graduation, he moved to Norman, Okla., where he worked in a mixed animal practice. While living in Norman, he met Mary Winton Whitaker. They married on Aug. 28, 1956, and shortly thereafter, Don was drafted into the U.S. Army as a 1st Lieutenant, receiving a Letter of Commendation. Stationed at Letterman Army Hospital, Holmes was chief of the experimental animal laboratory - the first veterinarian to hold this position. He was responsible for establishing the hospital's surgical research unit.
While serving in the military from 1955-1959, Don and Mary moved around the country and lived in various places including Chicago, Alabama, San Antonio and then San Francisco, where their son, Philip, was born.
After being discharged from the Army, the family moved back to Oklahoma. Don went on to earn a MS degree in Veterinary Pathology from OSU in 1962. Their daughter, Carolyn, was born in 1964.
Don was considered by his peers to be a pioneer in laboratory animal research. From 1962 to 1965, he worked as the first lab animal veterinarian at the Civil Aeromedical Research Institute at the Federal Aviation Agency in Oklahoma City. Under his leadership, they became AAALAC accredited.
Holmes' next appointment was split between the University of Oklahoma Health Sciences Center (HSC) and the Oklahoma City Veterans Administration Medical Center (VA). Shortly after starting, he became a diplomate of the American College of Laboratory Animal Medicine (1966). Again, he was the first lab animal veterinarian at both the VA and the HSC and under his direction both were AAALAC accredited. He also assisted with pathology labs for OU medical and dental students and established a nation-wide training program for VA animal facility supervisors. In addition, Holmes served as the lab animal consultant for the OU Medical Research Foundation and the main OU campus.
The family moved back to Stillwater. From 1979 to 1986, Holmes served as the director of laboratory animal resources and professor of veterinary pathology at OSU's Center for Veterinary Health Sciences. He was also the attending veterinarian for OSU. He authored a handy reference book entitled "Clinical Laboratory Animal Medicine: An Introduction" which has been distributed internationally.
His final position before retirement (1986 -1993) was chief veterinary medical officer for the Department of Veterans Affairs in Washington, D.C. He considered this to be the pinnacle of his career. He was responsible for policies, standards, etc. Then once again, Don and Mary moved back to Stillwater to begin his retirement.
In 2010, the VA recognized Holmes' commitment and dedication to the VA veterinary medical units with the establishment of the laboratory animal medicine reference library in his name. Throughout his career Holmes was active in organized veterinary medicine. He was a member of the American Veterinary Medical Association, the Oklahoma Veterinary Medical Association, American College of Laboratory Animal Medicine, American Association for Laboratory Animal Science, and the Society of Experimental Biology and Medicine to name a few.
Holmes mentored many young veterinarians as they began their careers in lab animal medicine especially through his work with the Veterans Administration. He and colleagues created the Association of VA Veterinary Medical Officers to better coordinate activities and communications among the many VMOs working in more than 90 VA Medical Centers across the country.
Outside of veterinary medicine, Holmes was a member of the Board of Management for the Edmond YMCA and a member of the Board of Trustees for the First United Methodist Church of Edmond. He was a life member of the OSU Emeriti Association (president in 1998-1999), the OVMA, and the Oklahoma State University Alumni Association - where he was recognized in 2016 as an outstanding OSU alum.
Don and Mary were very active in the First United Methodist Church in Stillwater and particularly enjoyed the Sunday School class. They moved to Wichita, Kan. in 2012, to be close to family and enjoy the various activities afforded in retirement community living.
Don was preceded in death by his parents, Raymond and Cornelia; wife, Mary; brother, Dale Holmes; and his best friend, Wade Lyon.
He is survived by his son and daughter-in-law, Philip and Noelle Holmes of Wichita, Kan.; daughter and son-in-law, Carolyn and Christopher Layden of Chester, N.J.; grandchildren, Dylan and Cameron Holmes and Hannah, Joshua and Zachary Layden and cousin, Peggy MacIntire, who he always considered as a sister.
Share condolences at www.CozineMemorial.com. Services by Broadway Mortuary.
Published on January 21, 2020
To plant a tree in memory of Donald D. Holmes, please visit Tribute Store.

Plant a tree in memory
of Donald

A place to share condolences and memories.
The guestbook expires on April 17, 2020.