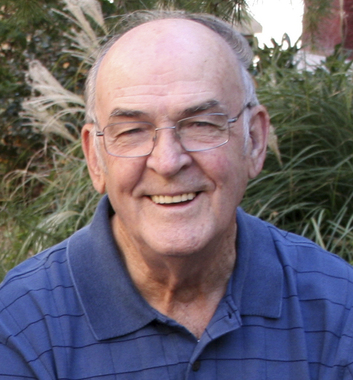 Back to Charles's story

Charles O. Haley, left this earth and joined his wife, Gloria in Heaven on Dec. 3, 2019. Charles was born June 22, 1929, to Alvie and Fannie Haley on the farm in Lunenburg, Ark. He was the middle child of nine siblings. He is preceded in death by his wife Gloria who passed away on June 1 of this year.
Charles and Gloria were married on July 2, 1949. Charles served as a Sergeant in the Korean War from 1952-1954.
He was a long-time member of Britton Baptist Church where he served as Sunday school superintendent for 40+ years. Most recently Charles was a member of Waterloo Road Baptist Church. Charles spent countless hours fishing on their dock at Lake Eufaula and before that at Lake Texoma. He loved spending time with family, especially his grandkids and great-grands!
Charles owned and operated Edmond Printing Company. While in high school, he swept the floors of The Edmond Sun and in 1965 bought the printing side of the business. In 1975 he and Gloria purchased Central Office Supply which was right next door to the print shop. They ran both businesses, side by side, until their retirement in 1995 when he sold the print shop to his daughter, Rhonda and her husband, Jeff.
He was many things to many people - basketball and bowling team member, coach, fishing mentor, bait-making instructor, Sooner and Thunder fan and a great brother and friend. Charles had an ornery streak and loved to tease and antagonize the ones he loved most.
Charles is survived by his daughter, Sharon Moore (Rex) and Rhonda Wade (Jeff) and his son, Darrell Haley (Sherry). Charles had four grandchildren, William "Justin" Wade (Kristin), Andrew Wade (Meredith), Rachel Jackson (Justin), and Elizabeth Haley, and five great-grandchildren, Timothy, Abigail and Titus Jackson, and Judah and Amos Wade.
In addition to his wife, Gloria, Charles is preceded in death by his sisters, Maxcene Fort, Leota Briney, and Neva Elliott, and brothers, Jay and Jerry Haley.
The service will be 10 a.m. Friday, December 6, 2019, at Waterloo Road Baptist Church. He will be laid to rest at Gracelawn Cemetery.
In lieu of flowers, memorial contributions can be made to Summit Camps, P. O. Box 2555, Edmond, OK 73083.
Services are under the direction of Matthews Funeral Home - Edmond.
Published on December 4, 2019
To plant a tree in memory of Charles O. Haley, please visit Tribute Store.

Plant a tree in memory
of Charles

A place to share condolences and memories.
The guestbook expires on March 03, 2020.